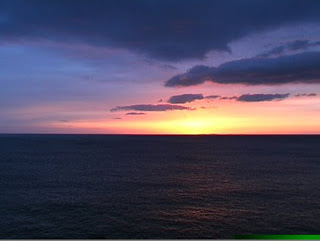 Dawn breaks on an achingly beautiful, clear spring morning looking North over the Atlantic to the Orkneys. Rainclouds clear. The sky colours itself like a celestial canvas, as the sun slowly rises and a new day starts. Orcadia is the second collaboration between Scottish Landscape artist Iain Stewart and London based sound artist Keith Berry, following 58º North in 2006.

Both films were made in the remote Scottish Highlands near Cape Wrath in the Northern Highlands. Inaccessible by road, and only by boat once the winter gales have died down, 'The Cape' is journey's end for the dedicated traveller alone. Of the two films, 58º North is the more "formally" structured, running in three sections, the middle part finding focus through rolling grey clouds to face the void from the depths of a rain drenched cavern. Orcadia is gentler and more lyrical. It's simplicity of structure echoes Stewart's earlier abstract dawn/dusk landscape work, 'From the Morning' (1995).

Like much of Stewart's earlier work , the films position the viewer at the doorway to some vast timeless, space - '...images of ‘not-here,’ resonant with ‘elsewhere,’ the possibility and the promise of passage. They point towards the journey’s end without designating it, without characterising it or giving it a name. They are invitations to a journey, not to arrival. Stewart’s Seascape works often represent thresholds ... as in certain meditation practices ... we are situated in emptiness, looking over emptiness, towards emptiness ... ‘ *

The sparseness and stark beauty of Berry's accompanying audio pieces for 58º North (24:21) bring rich new layers and textures to the narrative of the visuals. For Orcadia, Berry sensitively sourced then gently deconstructed the work of Spencer Grady to make the delicately evocative pairing Left At The Sun (21:07) and Right At The Moon (21:50). The marriage of visuals and sound is perfect.

'Keith Berry's minimalist sound sculptures form the perfect accompaniment to these visual paeans to natural beauty, barely moving and yet full of textural richness and complexity that is to be found within these stunning images. His music, reminiscent of Thomas Koner's glacial drifts and Steve Roden's tidal figurations, is so evocative and cinematic, it lends itself perfectly to the film. The muffled rumbles constitute their own auditory weather system that, when taken in tandem with Stewart's visuals, create still further images, metaphors and avenues of thought. ' **

Both pieces end, with deliberate ambiguity, as the sun rises, echoing an oft occurring motif in Stewart's work. Once more the viewer is left captivated - though perhaps with more questions than answers.


* from “Footsteps to Infinity; On Iain Stewart” extract from land/sea/sky © Iain Tromp 2004


Posted by isphotographs at 09:50 No comments:


“I only went out for a walk and finally concluded to stay out till sundown, for going out, I found, was really going in.” † 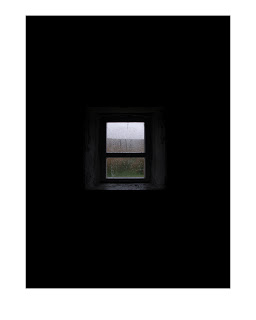 The Scottish landscape has steadily become a familiar, dominant metaphor within Iain Stewart's landscape work; formidable, harsh - unforgiving even - but at the same time offering beauty and solace, encouraging contemplation, self-evaluation. His 2009 project, BOTHY, continues and develops on this obsessive love affair with the land of his forebears.


In 2004, Stewart visited the Highlands for his LAND’S END/CAPE WRATH project, so beginning his re-appraisal of the North as a rich and productive environment in which to make work. Since then he has regularly returned, finding the light, the space and environment a source of great inspiration. As has been documented elsewhere, personal events around this time seemed to conspire to push Stewart to increasingly remote locations. The pilgrimages to Sutherland became more regular, and although he describes himself as 'not a natural walker', these trips began to involve increasing amounts of walking and wild camping. Stewart began visiting and staying in bothies in early 2009, drawing inspiration from the solace and contemplation these spaces encourage.

True Sanctuaries in the Wild, these deserted crofts are rare modern examples of altruism, left unlocked by the landowner to offer shelter for the night to walkers or lovers of wild places who find themselves out on the hills in need of a place to sleep. These spartan but-and-bens speak powerfully too of Scotland’s history, of the Highland Clearances, and the work responds to the ingrained melancholy of these lonely, abandoned homes, the empty space echoing an emptied landscape.

Today the rough, inaccessible locations attract the loner; indeed, the reasons this hard environment continue ache and pull Stewart back are not unique, finding space to meditate on the eternal spiritual strength and enlightenment that may be drawn from harmonious commune with the landscape, and translate this into a readable, engaging body of work. The liberation of walking, working and sleeping rough in the Highlands is deeply ingrained in this project; whilst the subject matter may appear humble, it's ambition is honest and universal; to look out from within. 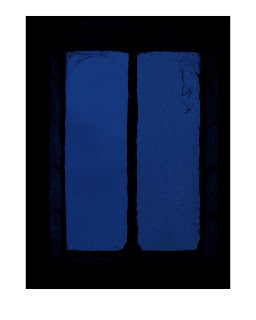 Through steeping himself in these quiet, evocative spaces, Stewart's ‘BOTHY’ project has steadily evolved, drawing on familiar elements in his work but developing and combining these with new working practices and a more open approach. Formal compositional decisions are made by the location of the window; the viewpoint is fixed, almost in the manner of automatic drawing; the ever-changing palette is driven by the light, climate, and the hour. The 'BOTHY' photographs offer a view to the 'beyond' of the exterior landscape, and acknowledges our interior placing and observation of the world outside by playing with the idea of the three planes of depth and meaning - interior/window/exterior echoing past/present/future.

As with earlier landscape work, familiar painterly inspiration is drawn from Abstract Expressionist or Romantic painters; Rothko, Turner, Freidrich can all be faintly traced. Other useful touchstones can be found in the writings of Robert MacFarlane ('The Wild Places', ‘Mountains of the Mind’) and Kathleen Jamie (‘Findings’); or in George Orwell’s' work in the 1940's on the Isle of Jura, where he wrote '1984' (originally titled 'The Last Man in Europe'), enduring the bleak conditions and isolation of his Barnhill cottage, and the metaphysical 'windows' to other worlds in the stunningly evocative writing of Phillip Pullmans' Dark Materials.

Perhaps the strongest single connection, though are the quietly evocative words of John Muir, and his meditations on the eternal spiritual strength and enlightenment that may be drawn from our harmonious commune with the landscape. 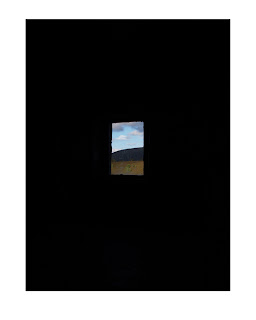 Muir (21 April 1838 – 24 December 1914) was a Scottish-born American naturalist, author, and early advocate of preservation of U.S. wilderness. His writings and philosophy strongly influenced the formation of the modern environmental movement.

Posted by isphotographs at 10:16 No comments: